Jun 28, 2019 | By: Ascent
Categories: In the Press, Blog, For College Students, For High School Students, For Parents and Cosigners 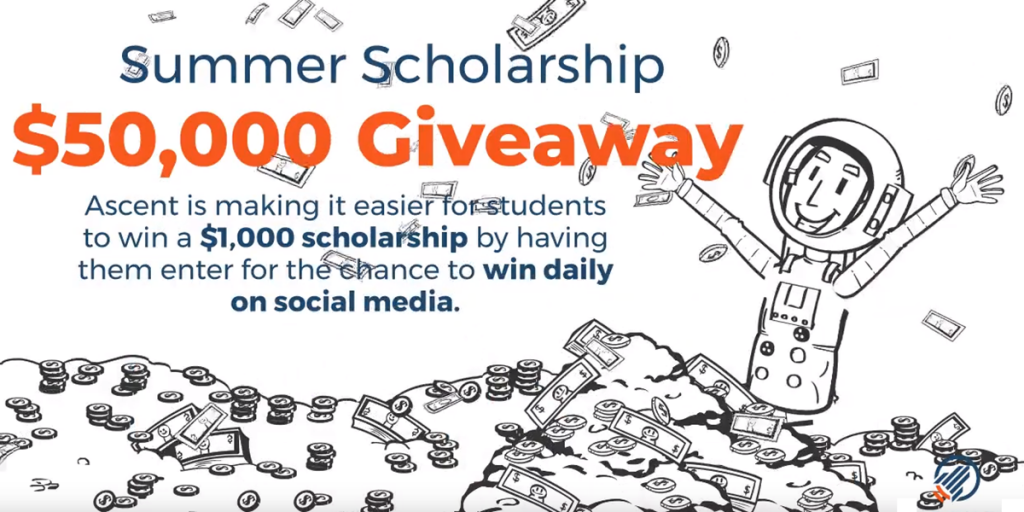 FOR IMMEDIATE RELEASE, SAN DIEGO (June 28, 2019) – Ascent Funding, LLC (“Ascent”), an innovative private student loan company that gives students more opportunities to pay for college, today announces the upcoming launch of its $50,000 summer scholarship campaign. Starting on July 8, 2019, Ascent is giving college students across the U.S. the chance to win a $1,000 scholarship every day for 50 days.

Ascent will post daily scholarship requirements on our scholarships page, as well as their Instagram, Facebook and other social channels where students (18+) can enter for the chance to win.

According to a recent Ascent study, Perceptions & Realities of Paying for College, students are taking on greater responsibilities in funding their own education – 72% of both high school seniors and current college students believe 50-100% of tuition and the overall cost of college should be their responsibility.

“Ascent puts students first by providing more options to help students pay for college, including the ability for students to access loans on their own or with a cosigner,” Chief Marketing Officer Kim McNealy said. “Ascent’s daily scholarship campaign is yet another way we empower students to make smarter financial decisions and help cover the cost of their college education.”

Students can win the $1,000 daily scholarship multiple times, giving them the possibility of winning thousands of dollars in scholarships this summer.  The scholarship campaign will end on August 27, 2019.

Students can enter for a chance to win starting July 8, 2019 and read the Official Rules at:

Ascent is built around one guiding principle: Student loans should expand possibilities, not limit them. That’s why Ascent created a new private student loan program that gives students more opportunities to qualify for a loan, with or without a cosigner.  Approved applicants can get the funding needed to cover tuition and living expenses. Ascent program loans are originated by Richland State Bank, Member FDIC. For eligible undergraduate juniors and seniors without a cosigner, Ascent utilizes broad credit tiers and may consider creditworthiness, school, graduation date, major, cost of attendance and other factors. Ascent encourages transparency and financial wellness by incorporating financial literacy into the application process, preserving the notion that an education is an investment where students and families should understand the return on their investment relative to the cost. Ascent also offers benefits and resources that set students and families up for financial success.

THESE OFFICIAL RULES ARE A CONTRACT—READ THEM CAREFULLY BEFORE ENTERING.  WITHOUT LIMITATION, THIS CONTRACT INCLUDES A RELEASE AND LICENSE FROM YOU, AND A LIMITATION OF CERTAIN OF YOUR RIGHTS AND REMEDIES. NO PURCHASE NECESSARY.  PURCHASES DO NOT INCREASE ODDS OF WINNING.  ODDS OF WINNING DEPEND ON NUMBER OF ELIGIBLE ENTRIES RECEIVED.  VOID WHERE PROHIBITED.

Enter for your chance to win a $1,000 scholarship every weekday this summer through August 2, 2022. Enter Now

Students must be 18+. See Official Rules.