Essentials and Tips for Commuter Students

Many students across the nation have been making the transition back to campus. The idea of finally walking through the hallways and feeling a part of the school culture is so exciting!

However, if your college is anything like mine, finding parking is a challenge. I often have to track down people in the parking lots, roll down my window, and awkwardly yell out, “Hey! Are you leaving?” making sure I get their parking spot before anyone else does. Otherwise, you’ll find me with the tons of other students circling all the parking lots and structures like sharks, just hoping we won’t be late for class. These are moments I wish I had a shrinking machine to zap my car into a keychain.

This is just one of the prices you pay for being a commuter student. Whether through bus or train, figuring out transportation is a perk to living off-campus with or without a car. Most students that have housing on or near campus don’t have to worry about driving since their commute is within walking distance.

Since commuter students don’t have a house or place that they can get to while being on campus, their car becomes their locker, in a way. Whether it’s a place to nap or throw a 10-pound textbook so you won’t have to walk around with it, your car has got your back. Here are some essentials other commuter students have shared through our Instagram story:

We went over some car must-haves; now it’s time to get into tips to improve your commute. It can get rough sometimes when commuting; it’s the price you pay for the many benefits to being a commuter student, like saving tons of money and being close to home. 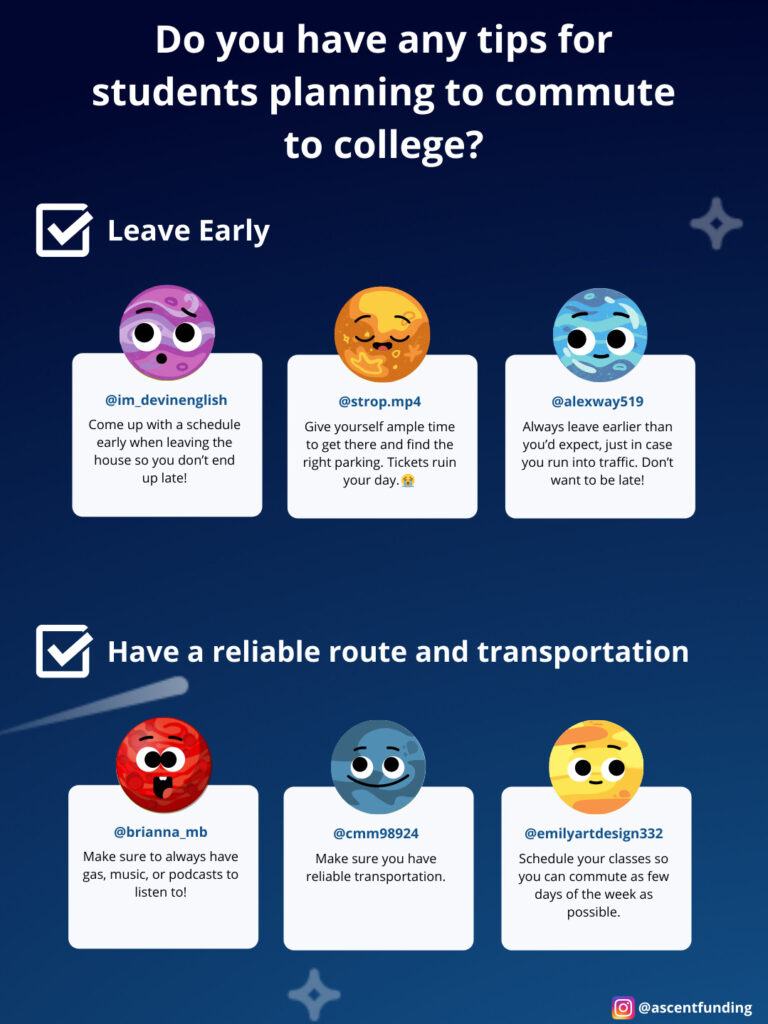 The goal all commuter students have is to get on campus on time. Chances are, your school is in a major city where traffic, lack of parking, and a million other factors come into play that could slow you down. It’s easy to scramble in the morning to try and get to school. Remember, it’s always best to be too early than to be too late! Foot traffic, once you’re walking to class, could also slow you down.

Making sure you create a schedule or plan for yourself and prep ahead of time can make such a difference. The days and times you choose to plan for your class schedule can beat the morning rush hour traffic and help you save on gas. Figure out if you would prefer to have classes and extracurriculars only on certain days and times of the week. It’s also helpful to find out the scheduled times classes start and end. There’s usually a rush of students leaving school after a class ends, which frees up parking.

Tip #3: Check Your Emails Before Leaving to Class

Look, showing up to a canceled class is annoying for students who live on campus, but it’s a lot more time and effort wasted for commuter students. To avoid showing up to an empty lecture hall and face-palming yourself after seeing that note taped on the door that class is canceled, ritually check your messages before leaving. Whether it’s your student portal, emails, or class group chat, check before you start your day!

Now that we got down to the actual commuting to school logistics, let’s go over what commuter students can use when on campus.

You aren’t the only one commuting to school. Chances are, commuter student services and resources may be available for the student commuter community within your school. For example, San Diego State University has a ‘commuter resource center’ where people can hang out in a lounge. There might be a small kitchen to heat your food in a microwave, catch up on work, meet other commuter students, and more!

Though not all campuses have some kind of ‘commuter room,’ all campuses certainly have their resources. Classrooms aren’t the only places you should limit your time on campus! Take some time to immerse yourself within the campus. Find a cozy spot in your school’s library, dining halls, career centers, and other campus resources to be part of your campus culture.

Tip #5: Use Your Breaks and Gaps in Between Your Schedule

It could be tricky creating a ‘perfect’ schedule. You may likely have gaps in between your classes and extracurriculars. Instead of wishing to go home, stay on campus! The amount of gas and time to go back and forth from home can be inconvenient, even for students living on campus and nearby. Familiarize yourself with the campus, meet people, and be productive within those few hours.

Tip #6: Make Friends and Get Involved On Campus

It may seem that it’s easier for students who live on campus to build an on-campus presence since they are often there; however, it shouldn’t be impossible for commuter students! Creating some sort of attachment to campus through clubs, organizations, campus jobs, and school friends can make a world of difference with your relationship to campus.

Commuter students benefit from befriending campus residents – having friends who live on campus (or nearby) means having more insider information that commuter students may not know. In addition, having that possible option of crashing your friend’s place for a bit is nice.

Commuting may seem like a hassle; news flash, it is! But it may not be as big of a hassle as you think. There are some silver linings which I hope are identified for you! There may be trial and error until you get to your right groove and routine, but you got this!

Checking your rate will not impact your credit score.